I had not taken part to eurythmy since years, when I resolved to join with my wife this activity in a group, in the village of Cortiglione, in “La fabbrica “, a former small industrial facility (years ago a place where parts of the body of Fiat cars were assembled).
The composition of the group itself was already a challenge, due to different ages, from retirees such as myself to young people, professional eurythmists and middle-aged people. Add to this that it consisted also of various nationalities (Italian, Dutch, German, Swiss, Uruguayan, Argentinian and Peruvian), using as common languages Italian/German/English/Dutch, and what might look like a daunting task, on the contrary, turns into a gradual and enthusiastic research into a “group” increasingly becoming aware of its “entity” as such, in spite of all these differences.
The eurythmy exercises consist of dancing to the sound of words, of movements inspired by the shape of letters, introspection and awareness of the world around you. So, for example, exercises by touching the ground with your feet in ways not previously explored, to “hug” the floor, so to say. And movements in synchrony with the group, how to create two circles of people, one inside the other, and move to and from the outer intersecting, obviously, without colliding. This painstaking search to perfect our movements, the explanations in the different languages, the reactions of each of us in our own language, contributed to raise our awareness and have increasingly strengthned the idea of the “group”.
We had a class on sculpture (using clay), and lectures by the Dutch composer and composition teacher Diderik Wagenaar, on various 19th century composers; most instructive, and deeper than going through a book by yourself. Specially because Francien Hommes was playing example works for piano in a touching way from different periods .
We also had four young violinists from Switzerland, led by their teacher, and the very listenining to their music was food for our souls.
On Friday evening, at last, on the church esplanade in Incisa Scapaccino, on the hill named Borgo Villa, in front of a large audience of local residents and other visitors, we had our performance, starring movements to the sound of the verses of a Dutch poem, and another to the sound of “I giorni” by Einaudi, for piano and violin (note: this second instrument adds a powerful yearning note to this piece).
After our contribution, we had poems by Ungaretti, in Italian, the music of the young violinists, dances by Gia, a difficult piece by Ligeti (Francine Hommes at the piano) and, also by piano, two compositions of Diderik Wagenaar. As endpiece of the evening the guests studying in Germany, from South America, namely Pia, Anita and their spouses, they sung songs of Argentina and Peru.
The public gratified us with a lengthy applause, it was the peak of the week; the next day in “La fabbrica”, we evaluated how we had experienced this special week.
Conclusion?
An experience that words cannot sum up, but with these few words: food for body and soul.
At last, a due consideration, since it was my first visit, on Gia van den Akker and her husband Florian Oelssner (I had heard of him but I had not met him before).
This couple, having joined their lives due to Amor, lead a life on creative parallel tracks: she on the wings of art (dance/eurythmy, workshops and music) and he, former choreograph and doctor, did completely change course and has established himself, German in Piedmont, as a leading winemaker, with his Barbera, Merlot and Sauvignon Blanc wines.
Here art joins the very land and its more fragrant and noble product : wine.
So “Agri-Art à la carte”!

I had really good experiences with Gia.
The course itself was very flexible and open to my needs. I`ve just finished 4 years of training and 1 year of stage training. And I am just about to go back to my own country (Japan) and do something with eurythmy. I was thinking about possibility of eurythmy, how eurythmy can be recognized as art and how I can work with in the „normal“ world. I believe Eurythmy is for everybody and must go in „normal world“.

So the course was just perfect for my questions. Gia has many experiences for it as well as practical skills. She gave me the knowledge and methods how to connect between my idea and the reality. When I get more clear what I should do I get lots of enthusiasm and will to do it.
I was inspired by her professional attitude, costume and stage set up and so on.
She introduced some practice for improvising and play. It`s a really important skill when you want to perform on stage. It was really a new experience for me.

And in the music I did go through basic elements of Eurythmy. I realize it is really important to go through with a different teacher. Her constitute of lesson was so clear and easy to understand. For example she can explain how to achieve through imagination and explanation. So I could learn how to go further in my eurythmy skill.

We were exploring modern music. I learned how to work with modern music.and how the music has changed or developed. I feel through this session  I am well prepared for a new step into my future. I got some confidence and courage for the future because I know what I should do and how.
I could say you can built the bridge between the past experience and future vision.
It is short time but it is full of content.

The events during this week were in both a mood of creativity and inner and outer freedom in La Fabbrica, a sanctuary for creative forces having been converted from its previous incarnation as Fiat factory into eurythmy studio. Ranging from around 22-60+ in age, the group (as we are often tremendously blessed with in eurythmy circles!) of 11 including Gia and Hans was wide ranging in background: Dutch, German, Russian, Bulgarian, Texan, Swiss, Italian, Swedish, and French. It was a wonderfully inspiring environment for me, placing myself into the company of this group in La Fabbrica, challenged to discover new smells, new colors, and new movements in my being. Euritmia, Una Gioia: My experience this week was filled with curiosity, enthusiasm, encouragement, creativity, and joy!

Gia van den Akker and Hans Fors guided us through the week, leading us in Tone Eurythmy and Speech Eurythmy courses, respectively, each morning, followed by masterclasses and an improvisational hour in the afternoon. Evenings included lectures from Hans, and on the final evening there was a presentation open for the public. Coffee breaks and communal meals allowed everyone to socially flow together in un modo molto italiano, and boisterous conversation and sharing was abundant every moment outside of movement!

In Tone Eurythmy, we worked on exercises emphasized in the teaching of Elena Zuccoli, including the tone steps and major and minor scales. We then worked on further differentiation of the instrument in the three realms outlined in the eurythmy meditation and explored the relationship of these realms to the perceptive capacities of the 12 senses. This was directly in the context of the musical elements, based on the work of Natural Scientist Thomas Gerbel. For example, tasting the music with the arms, is the quality of this perception sweet, sour, salty, or bitter, etc? By feeling consciously into these living sense activities, one is able to deepen his/her feeling of the living music. Working with the tone and interval gestures and forms, we created small group choreographies for “Variationen zur Gesundung von Arinuschka” by Arvo Paert. This work allowed us to explore the unique role the intervals have as they carry the ascending and descending scales with a counter movement (for example, the ascending scale has descending melodic intervals at the beginning of every 3 note sequence). In a very pure, light-filled space, the intervals and tones give the traces of a cosmic whirlpooling eurythmic movement, breathing with the transformed inner and outer spaces of the music.

In Speech Eurythmy with Hans Fors, we worked to better understand or feel the term Raumbewegungskunst. We spent the week working with exercises on this theme in many different ways. From warming-up exercises in the circle; to an exercise with one person moving his/her periphery of six people, each connected to the center with one rod; to counter-movements in the speech sounds themselves; to spatial exercises where the gestalt moves counter to the arms, every day included a whole different realm of movements that let us experience new qualities of the space around us and differentiating awareness between regions of the body. In different groups, we developed sound sequences with an intricate form from Hans, where every gesture was in counter movement with the form, thus extending one’s flexibility. This culminating work, as well as the whole wealth of activities throughout the week, gave eurythmical space to imaginatively play with the instrument and to feel again and again the moving of the space with one’s soul.

Each afternoon was filled with individual or duo work in masterclasses with Gia and Hans, developing further or refining, pieces that were in different stages of preparation. In complete respect and joy did Gia and Hans carefully inspire our eurythmy, both deepening experience and extending movement to exhibit new realms of expression.

One hour of improvised movement sessions in the afternoons let the soul pour freely into feeling ourselves as well as the group in space, with certain parameters of inspired guidance. Where is the movement coming from in the group and where is it going? Who is leading? How can I accompany his/her movement in my perception in every direction? These hours were filled with inner intrigue.

Two evenings of the week, Hans presented his new research to us about the early history of eurythmy and the concurrent history of dance, which will be published soon in his new book. Living with these concrete polarities of past, present, and future in idea, ardor, and form, we were thankful to be more conscious in our creatively working souls in the eurythmy of tomorrow. How did movement arts develop in the early 20th century with the vital inauguration of esoteric, spiritual paths? An enthralling topic for an eurythmist in the present.

The Dutch painter Rembrandt van Rijn once said: “Practice what you know, and it will help to make clear what now you do not know.” In this spirit of inwardly living at the same time in both past and future, like the extraordinary contrast of light and dark in the Dutch master’s painting, the artistic soul creates the present, ripe with anticipation. To do this through one’s own body is both the luxury and the hard “practice” of the eurythmist.

The final evening of the week was an exciting public presentation of this creative work to make the unknown slightly clearer, which is always freely in progress at La Fabbrica. 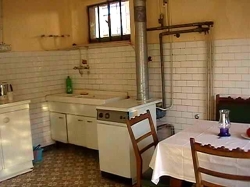 No events right now, but come back soon!